Venetian glassworkers came to Antwerp in the 1530s. Within a hundred years or so, the Low Countries (today corresponding to the Netherlands, Belgium, and Luxembourg) would have more Venetian-style glasshouses than could be found anywhere else in Europe. These glasshouses would have been situated in such cities as Amsterdam, Middelburg, Antwerp, Maastricht, Haarlem, Brussels, and Liège. By the first decades of the 17th century, the repertoire of forms and preferred decorative techniques for glassmaking in this region had been codified to a large degree.33

Archaeological excavations and follow-up studies during the last 25 years or so have given us a clearer view of glass and glassmaking in the Low Countries, particularly during the 17th century.34 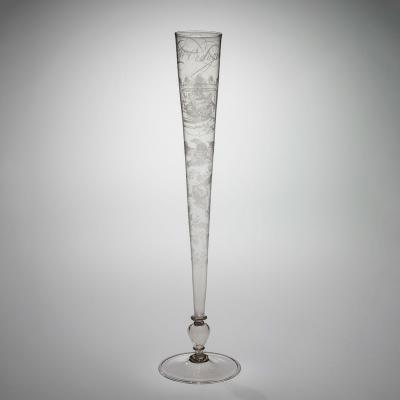 One of the iconic forms of glass production in the Low Countries is the exceedingly tall, narrow flute that is frequently depicted in 17th-century Dutch still-life paintings (Fig. 25).

For even the most skilled glassblowers, this form presents formidable technical challenges. The most difficult aspect (aside from the awkwardness of moving about with a very long object attached to the end of a blowpipe and punty) is keeping the blowpipe sufficiently hot while working on the stem and foot. As can be seen in the video, this is done by frequently returning the entire flute deep in the glassworking furnace throughout the manufacturing process. Failure with this critical process will, without exception, cause the larger end of the vessel to irreparably crack long before the glass is transferred to the punty. 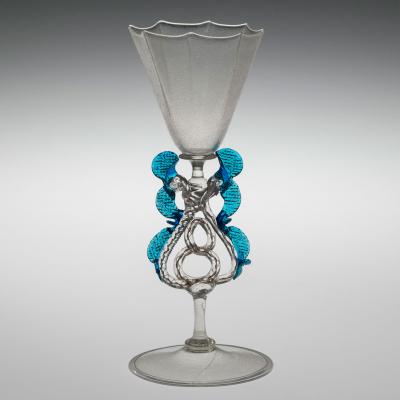 Here is another iconic form of 17th-century glass production in the Low Countries. The stems of winged glasses were made in an endless variety of pretzel-like patterns. Some of the surviving examples of these glasses have lids with finials that imitate the stems, but in miniature.

The stem and its manufacturing process are unique, completely unlike any Venetian model. After years of experimentation, the manner of making the connective structure on the bottom of the cup and the stem emerged, ever so slowly. Both have great advantages over purely Venetian constructions that perform the same functions.

The combined merese (a disk used to join two parts of an object) and avolio (a capstan-shaped construction consisting of two mereses joined by a short section of glass rod) are hollow, with the vessel’s cavity continuing downward to avoid any area of substantial thickness. This reduces the time required to cool the object from working temperature to room temperature.

The highly original stem and its method of manufacture allow the goblet to be built entirely on the blowpipe and punty, instead of making the parts and then, in a separate procedure, assembling them with glue bits. This can make the work quicker and, to some degree, easier. 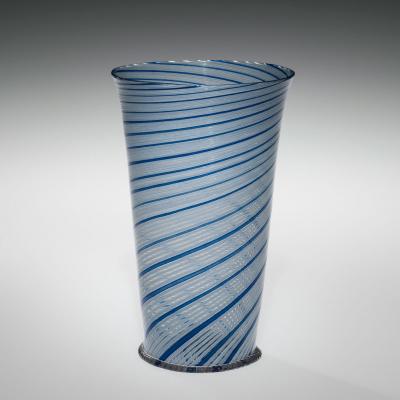 This form appears in silver, gilded silver, ceramic, and glass decorated in nearly every conceivable manner—from ice glass to reticello with gold leaf between the two layers of glass. Beakers with alternating white and blue threads are probably the most typical form. Upon close inspection of many examples, one notices that the diameter of the canes is very small, and that there is a colorless glass liner considerably thicker than the canes.

In my attempt to replicate the manufacture of these beakers, I made many attempts to employ the traditional Venetian technique of sbruffo, in which a bubble of molten colorless glass is lowered into the cylindrically rolled-up canes, but I eventually abandoned that effort. It always failed to create a lining as thick as in the historical examples. The canes were, as shown in the video, rolled up on the exterior of a rather thick molten glass bubble.35

The traditional Venetian method of twisting the canes was also abandoned in favor of the marvering-in-place technique seen in the video. Only this process led to the “loose” twist near the base and a much tighter twist near the rim.36 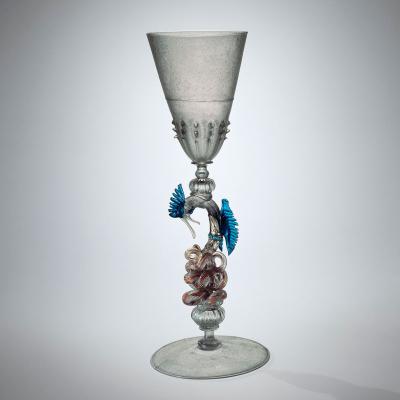 By the beginning of the 18th century, Venetian glassblowers had become accustomed to constructing a goblet by one of two methods. The first method involved “building an object on the blowpipe” (for lack of an existing term, the description is mine).

Here, a sequence of additions is made to an initial bubble created on the end of a blowpipe, typically in the following order: merese, stem, merese, foot. A punty is attached to the foot, which is then broken free of the blowpipe. After the open end is reheated, the cup of the goblet is completed. This is the process shown in these videos:

The alternative process, one typically used in constructing goblets (and other objects) of great complexity, is one I refer to as “building an object from premade parts, attached using glue bits.” This process involves two phases of work. First, the various components—usually a cup construction, a foot construction, and a dragon—are made and kept hot in an oven. Next, the parts are attached, using glue bits to hold them together.

The dragon-stem goblet featured here has long been identified as of “Netherlandish” origin.37 However, the Low Countries construction process for complicated winged glasses, as shown in the video for Winged Glass, is very different from the technique employed here. The provenance of dragon-stem and serpent-stem goblets remains open to debate. 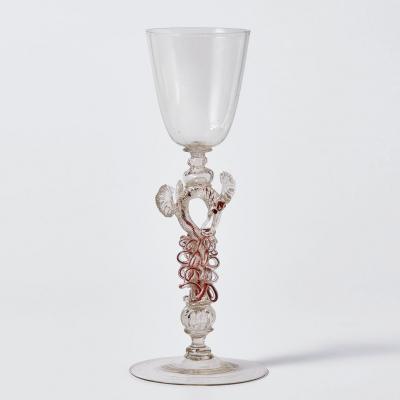 Except for one feature and construction procedure, the manufacturing method for this object is the same as that for the Dragon-Stem Goblet.

In Dragon-Stem Goblet, the coiled body surrounding the straight, vertical portion of the stem is made of one piece of glass. In Red Dragon, however, the coils are made from another gather of glass. To my knowledge, this is a unique feature for this type of object. It suggests that the glassblower was familiar with the Venetian method of “building an object from premade parts, attached using glue bits” but, curiously, unfamiliar with the Venetian method of creating the coiled element of the stem. This may well support a Low Countries provenance for the Red Dragon. 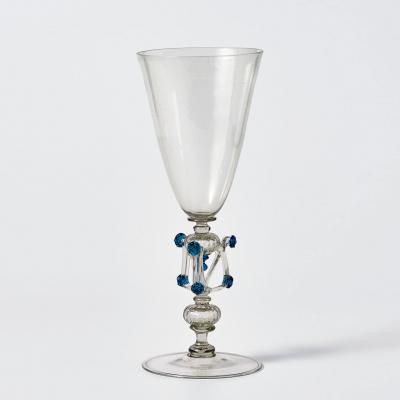 The complexity of the stem could easily make one assume that this goblet was built from prefabricated parts that were assembled with glue bits. However, it was not. Like the Winged Glass, this multi-element construction was built “on the blowpipe.”38 This increases the likelihood that this openwork goblet was made in the Low Countries.

For a typical object built “on the blowpipe” in this publication, see Tall Flute; for a typical example of “building an object from pre-made parts, attached using glue bits,” see Dragon-Stem Goblet.