The video shows retortoli canes being made and cut, then placed on a ceramic place-holding plate and then pre-heated. Next, a thick cylindrical bubble of glass is rolled over the canes, thus embedding them in its surface. Glassblowing is then used to make the vessel and its foot.

After the glass cools, the canes are cut into sections (lengths of about 5 inches). A few of these canes are placed on a grooved ceramic plate, and they're adhered to the exterior of a gather of clear glass. This will become the twisted retortoli canes. With reheating and marvering, the white canes are pressed into the surface of the transparent glass. They're attached to a post, and as the pull takes place, both ends are twisted.

The vessel begins with a rather large gather of transparent glass. It's blocked and a bubble is blown. The bubble is elongated and allowed to cool. Its diameter is carefully monitored. And during the subsequent blowing and shaping process, the bubble is forced outward so that the tip is rather thin. The canes (preheated on a ceramic plate) are rolled up (or attached to the outside of the bubble). With reheating and marvering, the canes are softened and pressed into the surface of the bubble. The tip is pricked out. A constriction is made. The excess glass is tapped off, and this leaves a hole in the tip of the gather. This bubble, decorated with the canes, will serve both to make the vessel body and to make the foot.

So, the bubble is divided into two sections: The part nearest the blowpipe will become the vessel, this outermost part will become the foot. It's attached to another blowpipe. The larger portion that will become the vessel is placed at the mouth of the furnace while the foot is prepared. The foot is placed on hold at the mouth of the furnace while the vessel is created. The form of the vessel is that of a tall cylinder. The glass is reheated, marvered so that the tip is pointed and cooled. The glass is inflated and pulled outward. Centripetal force is used to elongate the bubble. A constriction is formed near the blowpipe. Excess glass on the tip is trimmed and, after reheating, a combination of spinning (to create centripetal force), in conjunction with blowing, is used to create the vessel body. The tip of the bubble is left slightly conical. The foot is reheated. The lowermost part of the vessel is given its final shape, slightly tapered. And the bubble, which becomes the foot, is reheated, marvered to shape. The vessel is propped upright, the foot reheated, and the bubble lowered into place. The constriction in the foot is broken. This leaves a hole. And after reheating, the hole is dilated to a diameter of about an inch, the soffietta used to inflate the glass. The foot has a folded rim. The edge is pushed inward and, as the foot is enlarged, the edge becomes double thickness, and it's both attractive and much stronger than single thickness.

The foot is given its final shape and the punty attached. The pincers are held in the constriction, the blowpipe is tapped against the right arm of the bench, and it breaks free. The glass is reheated and opened, and after more reheating, the soffietta is used to pressurize the vessel and reshape the upper half. The jacks are used to ensure that the vessel is truly cylindrical, the soffietta used to blow the thick (still hot) glass thinner. To avoid torque that would distort the pattern of the canes, the punty is turned back and forth evenly. The vessel is lowered into the annealer. The punty is tapped with the pincers, leaving the vessel in the annealing oven for slow cooling. 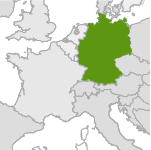