Although Venetian cristallo was known in urban centers such as Munich and Kassel and in nearby Austria, within German lands there seemed to linger, from the Middle Ages, a strong preference for green and bluish green glass. Apparently, to German people, these colors enhanced the appearance of their preferred wines. In addition, there seems to have been an inclination toward vessels of much greater capacity than was typical of Venetian designs. Large, sometimes very tall and narrow forms—often heavily enameled—seem, with few exceptions, to have dominated the German market for luxury glass.31 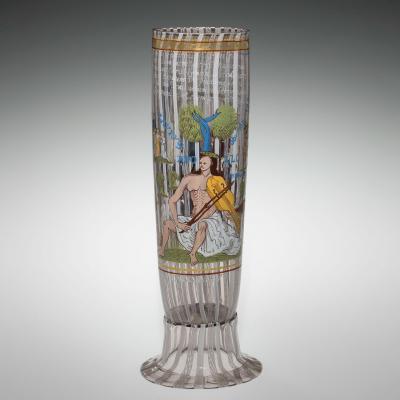 The form of this very tall and narrow object and the iconography of its decoration are probably of German origin. (There is always the possibility, however, that such objects were made in Venice for the German market.) At the same time, the filigrana technique is decidedly Venetian.

As can be seen in the video, the preheated canes were attached to the exterior of a thick-walled, elongated molten bubble of glass. The bubble was then divided into two unequal portions: the larger part became the tubular vessel body, and the smaller part was used to make the foot. (This is confirmed by the fact that the same canes, in the same pattern, appear on both parts.) The vessel is thin and well made. Because we know that Venetian glasshouses skillfully—and lucratively—tailored their wares to be sold in different markets (see “Introduction”), it is impossible to say whether this object was made in Germany, either by local workers who were highly proficient in Venetian techniques or by itinerant Venetians, or—as suggested above—whether it was created in Venice.

The decoration is permanent: fired gold leaf and enamel. By the time this vessel was made, these techniques had long been out of fashion in Venice. Perhaps this supports a German origin for the object.32