If, as now appears to be the case, the Swiss Goblet was indeed made in Switzerland, it joins a group of locally made glasses that includes a large number of enameled glasses (Fig. 24). The decoration of these vessels, known among glass historians as “peasant glasses,” nearly always includes a date that is, without exception, in the 18th century. Peasant glasses have two features in common with the Swiss Goblet group: the glass is often of exceptional clarity, and the bottoms of the vessels are noticeably—and evidently intentionally—much thicker than the walls. 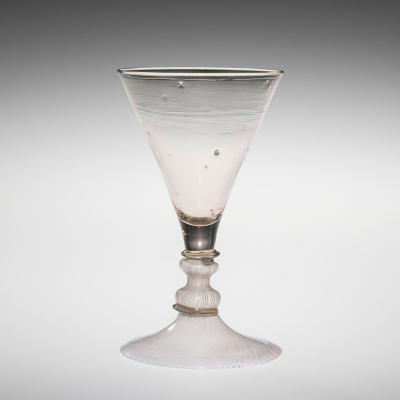 Recent reconsideration of the origin of this goblet and its many parallels in private and public collections exemplifies how a long-established and -accepted provenance can, on solid grounds, be revised. Although these glasses have long been identified as having been made in the Low Countries in the 17th century, new archaeological evidence suggests that they are more likely to have been produced in one or more glasshouses in Switzerland in the early 18th century.29