The video shows the canes being made, cut, and preheated on a ceramic place-holding plate. A solid cylindrical mass of glass on the end of a blowpipe is rolled over the canes, thus attaching them. The glass is then inflated. Next, in an unusual process, both the stem and the foot are formed from a single bubble of glass.

The cores of the white canes are transparent glass. The cane making begins with a gather of clear glass thinly overlaid with opaque white glass and, after this solidifies, another gather of clear glass is taken. Here, the layer is very thin. Excess glass is allowed to drip off into the furnace. The cane is pulled by attaching the white glass cane to another post of glass on the end of a different metal rod. The glass is gradually elongated and pulled to a cane of about a 20-foot length. After the cane cools, it's cut into lengths of about 4 inches.

The vessel body begins with a gather of transparent glass. This is blocked to create a spherical shape, and then rolled back and forth on the metal table (the marver) to produce a cylindrical shape. Its diameter is carefully monitored and altered to correspond to the length of the roll-up of canes. They've been placed on a ceramic plate, heated to about 1,400 degrees Fahrenheit, and they stick to the clear glass. After reheating and marvering, the canes and the clear glass become as one. Marvering continues as air is blown into the blowpipe, and the bubble gradually moves outward into the mass of clear glass.

It's from this bubble that the vessel body will be formed. The canes are brought together at the tip by making a constriction. Air is blown into the pipe. The sides are held in check with the jacks. Air is blown in, a constriction is made and, after reheating the lower half of the bubble, the side angle is set. The bottom is flattened and left slightly conical. The merese on the bottom of the cup is formed by attaching a small gather of glass to the end, pressing it flat, making it slightly conical, and then placing a blade of the jacks on either side and squeezing. This bubble will become both the stem and the foot.

After reheating, the bubble is divided into ⅔ and ⅓ segments. The upper third will become the stem. The lower ⅔ will become the foot. A hole must be created in the end of the bubble, and this is done by making a constriction, holding the constriction with the diamond shears, and knocking off the excess glass. After reheating the bubble, the hole is opened to a diameter of about an inch. During this reheating (necessary to soften the foot bubble) the stem unavoidably softens. It's force-cooled with air from the soffietta. The foot is reheated multiple times to allow the tooling to take place. At this point, the tip of the stem is open. So, the foot is pushed back to allow a bit of glass to be added to the tip of the stem and flattened. This will serve two functions: It will seal the stem and it will also produce a surface for the punty to rest upon. After reheating, the foot is given its final shape.

Next comes the transfer to the punty. The neck is held with the pincers and the blowpipe tapped against the right arm of the bench, and the neck breaks. Excess thick glass near the rim is removed by creating a flare, pulling outward, and thus thinning the glass. The thick glass is knocked free. After reheating, the hole is opened to the diameter of about an inch. The soffietta is used to cool the lower portion of the cup. The upper portion inflates. The vessel has a folded rim. So, the edge is pushed inward just prior to dilating the hole. And after frequent reheats, the jacks are used to create the final, flaring rim. Centripetal force is used to increase the diameter of the rim. The jacks are used to create the exponential curve characteristic of this sort of glass. And after a flash to ensure that everything is above 1,000 degrees Fahrenheit, the vessel is lowered into the annealing oven. The punty tapped, thus breaking the vessel free. It's left in the annealer for slow cooling. 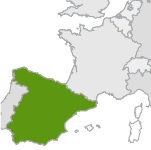