Venetian-style glassworking was taking place in England by 1549, and this activity increased throughout the second half of the 16th century. A pivotal figure, Jean Carré (b. France, d. 1572), arrived from the Netherlands in 1567, and he is credited with organizing and improving the English glass industry. Under the leadership of the Venetian glassblower Giacomo Verzelini (1522–1606), the Crutched Friars glasshouse in London was given a royal privilege—effectively a patent—to produce “Venice glasses,” which lasted for 21 years.42 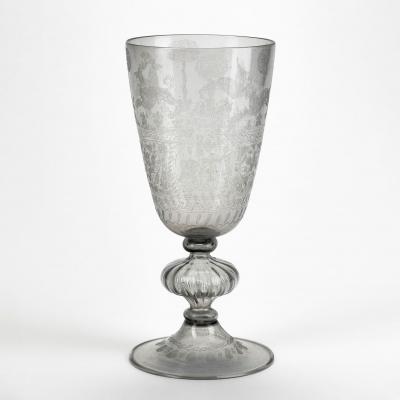 This goblet was built “on the blowpipe” (see Dragon-Stem Goblet) in the traditional Venetian manner of creating less complex objects. Somewhat outside the normal construction process, the vessel was made with no mereses between the hollow elements. The direct attachment of the parts is technically a more difficult procedure, but it results in an object with very clean, uninterrupted lines. 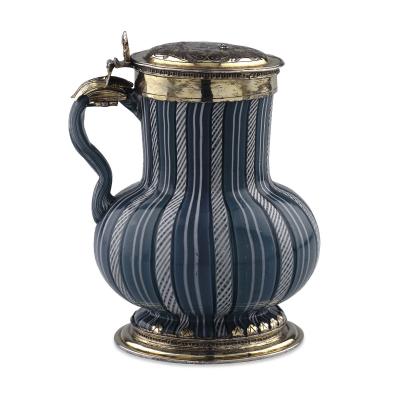 If, as has been suggested, this tankard was made in London before 1548–1549 (the hallmark dates of the gilded silver mounts), it would be an amazing accomplishment, because Venetian glassblowers had arrived in England only in 1549 (!). Considering the very high degree of difficulty for making the tankard, a Venetian origin seems much more likely.43