By 1525, Florence was sufficiently established as a glassmaking center that the importation of outside glass was forbidden. In 1567, Cosimo de' Medici (1519-1574), the greatest arts patron of his era, arranged, with the permission of the Venetian government, to establish a Venetian-style glasshouse in Florence.16 Luigi Bertoli, a maestro from Murano, was given a 14-year contract to produce cristallo17 in the Venetian style. To an unprecedented degree, the patronage of Medici (and succeeding members of his family) tied Venetian-style glassworking to both the fine arts (drawing and sculpting) and scientific research.

The connection with the fine arts was made by commissioning major court artists to create designs for the glassworkers to realize in cristallo. One of these artists, Giovanni Maggi (1566-1618), produced four volumes of drawings that range from conservative, traditional forms (Fig. 19) to perhaps the most fantastic shapes imaginable.18 Some of the latter are unlikely to have been made, however skilled the artisans (Fig. 20).

In regard to the scientific connection, also under Medici's patronage, the Santa Maria Novella Pharmacy (founded in 1221) was, no doubt, one of the glassblowers' customers, purchasing jars for storing chemicals and containers for medicines. Later, the Accademia del Cimento, established in 1657 by Galileo's students, commissioned glass scientific instruments, including thermometers, barometers, and hygrometers. The glassworkers used a combination of furnace glassblowing and flameworking (or lampworking) to fabricate extraordinarily elaborate structures (Fig. 21).19 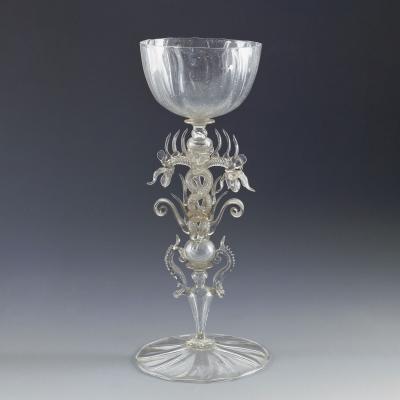 An imposing object, both in size and in complexity, this chalice can be seen at the Museo Galileo in Florence. Also on display there are the surviving glass scientific instruments from the Accademia del Cimento.20

Like all highly complex Venetian-made vessels, the chalice was manufactured in two stages: (1) the making of the individual sections and (2) the assembling of the structure, using glue bits (small bits of molten glass) to join the parts. This is the procedure by which Venetian glassblowers made their famed dragon-stem goblets of the 17th and early 18th centuries.21 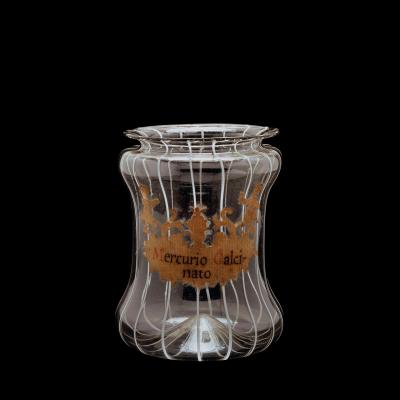 This form, here subtly decorated with white filigrana canes, characteristically has a pronounced flare just below the rim. This can be used to hold in place a piece of string that secures a cloth or paper over the vessel’s opening. Albarelli are storage jars. Here, the attached label suggests that the vessel may have been employed either by an alchemist or in a pharmacy such as Santa Maria Novella. The provenance of these objects (many of which are undecorated) is usually listed as Tuscany or Catalonia.22

My many experiments at the furnace, trying different methods to re-create both the wall thickness and the degree to which the canes stand slightly raised on the outer surface of the original object, led to the unusual process shown in the video. The regular—and expected—traditional Venetian process of attaching preheated canes to the exterior of a thick-walled bubble of molten glass repeatedly failed to replicate the two above-mentioned features. The walls were too thin, and the canes unavoidably became completely flush with the outer surface of the finished vessel. This eventually led to the surprising process shown in the video. The preheated canes are attached to a solid molten cylinder of glass, after which the glassblowing begins. Interestingly, the same unusual process is shown elsewhere in this publication (see Spanish Wineglass). Perhaps the similarity of these processes suggests the greater likelihood of a Catalan, rather than Tuscan, origin for this albarello.

Cristallo is a glass of exceptional clarity that was first made on Murano by Angelo Barovier during the mid-15th century. Barovier named the glass cristallo because of its intentional similarity to rocca di cristallo, Italian for “rock crystal.”

Museo Galileo, Florence, www.museogalileo.it. These objects were on display during my two visits: about 1978 and in 2016.