The video shows the three parts—bowl, stem, and foot—attached directly from above without the use of mereses, which are more conventionally employed.

The cup begins with a rather large gather of clear glass on the end of a blowpipe. The glass is marvered back and forth on the cold, metal surface. Air is blown into the blowpipe gradually, and the tip is marvered to make it pointed and to cool the glass. The rubber blow hose is attached. This will enable blowing to take place during manipulation. The end is pulled, inflation begins, and a constriction is begun near the blowpipe. As the glass is inflated, the end is pulled so that it becomes a tall, relatively narrow bubble. The tip is trimmed, the constriction near the blowpipe completed, and the excess glass is tapped free. The lower half of the bubble is softened, the jacks are held against the sides, and air is blown in to gradually round the end. The end of the bubble is made somewhat conical and this will make it easier to center the stem.

The stem begins with a gather of glass lowered into the 18-rib optic mold. It's inflated gradually and centered on the tip of the bowl. Immediately, a narrow decorative constriction is made, and further out, another constriction. These two will define the shape of the stem. The second constriction is held with the diamond shears, and the excess glass broken free. To the tip of the stem is added a small gather of glass. This is reheated to ensure it being perfectly round and symmetrical. It's then flattened, a blade placed on either side, and squeezed while turning. This creates a merese.

With the vessel propped upright, a third bubble is brought from above. This will become the foot. The bubble is trimmed free from its blowpipe. The uppermost part of the foot is given its shape. A constriction is formed. This will enable a hole to be created at the tip of the bubble. After reheating, the hole is opened to the diameter of about an inch. The soffietta is used not only to increase the diameter of the foot, but it's used to cool parts of the stem that unavoidably soften during the reheats. The foot has a folded edge. The edge is pushed inward, and then upward, as the foot is given its final form. This creates a double thickness that's both attractive and much stronger than a single thickness.

The form is given its final shape. The edge is made flat and a punty is attached. The punty is a handle with which the vessel can be held during the completion of the opening. The tips are held in the constriction, the blowpipe is tapped, and the neck breaks cleanly.

The opening process begins. The original object has an exceedingly thin edge. To achieve that, a flare is made. The flare is pulled outward and this pulls the glass thinner. A constriction is made and, while holding the constriction with diamond shears, the excess glass is broken away. The final opening begins with a reheat and the dilating of the hole to the diameter of about an inch. The soffietta is used to reshape the upper shoulder. It's opened further and immediately blown with the soffietta. The glass is reheated, tooled, reheated, and given its final profile. And the finished vessel is placed in the annealing oven by tapping the rod gently, breaking it free. The object cools over about an eight-hour period. 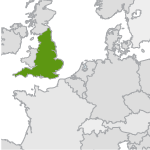