The video shows, first, the four elements of the goblet and a fifth element for the finial of the lid being made and place in an oven. Next, the assembly process begins. After the foot element has been attached to a pontil, the other parts are added and adhered together using small amounts of glass—'glue bits’—freshly gathered from the furnace. The lid is made and then, while it is held from the inside with a pontil, the cross-topped crown-shaped finial is attached.

The central element of the crown is hollow. A small gather is made on the end of the blowpipe. Air blown in. The gather is elongated, and a series of constrictions made. The last segment will become a disc. So, the last segment is inflated further. A constriction made, and this will create a hole in the end. After reheating, the hole is opened slightly. The soffietta is used to further inflate this last segment. A punty is added. The bubble is broken free of the blowpipe, and bits of glass are added and manipulated to create the crown. The waffle pincers are used, and then the fine straight pincers used to elongate and shape the two leaves. A flattened bit of glass is added, cut free of its gathering iron, and attached to the far end of the hollow element. This is repeated six times. Throughout the process, the entire construction must be kept well over 1,000 degrees. The denticulate pattern on the edge of the ribs is created by adding a bit of glass and then pincering it. The crown is broken free of its punty and placed into the annealing oven. It's held at a temperature of about 950 degrees.

The monogram begins with the letter C. C for Carl. Carl and Eleonora, King and Queen of Sweden in the later 17th century. The gather of glass is elongated and wrapped around the brass tool. The tips of the pincers are cooled and held in places and tapped, and this breaks the glass cleanly. The Cs are placed in an annealing oven.

Next, the Es are formed. All cross-sections are square. The end is cut to proper length, and a constriction formed near the punty. The next element is made square in cross-section, attached, cut free of the gathering iron, and shaped. Throughout the process, all parts must be kept well over 1,000 degrees Fahrenheit or they will crack. A tiny bit of molten glass is added to the E and used to stick the E to the C. This is placed on hold while the other monogram is made. They're placed atop each other, and then both parts are picked up, together, on a punty. After checking for alignment problems and straightness, a tiny bit of glass is added to the top, and this will adhere the two together, permanently. A little water is dripped near the punty for a clean break, and the monogram portion of the stem is placed on hold.

The foot begins with a double knop. A small gather of glass is inflated and lowered into a 12-ribbed optic mold. After the bubble is elongated, constrictions are made. The one nearest the blowpipe will be used to break the foot free of the blowpipe, eventually. Excess glass is trimmed away. A merese is created. A bit of glass is added, flattened, made slightly conical, and another gather is added to its tip, flattened, a shallow groove is formed and a blade on either side creates a sharp edge. Another mass of glass is added to the tip. This will become a short stem element, and it's on this disk that the foot will sit.

The foot is another bubble of glass delivered from above, and carefully placed on center. The bubble is cut free of its blowpipe. The end is pulled gently. A constriction is formed, and while holding the constriction with the diamond shears, the tip is broken away with the pincers. This creates a hole. After reheating, the hole is opened somewhat. After another reheat, the soffietta is used to inflate the foot further. The foot has a folded edge. The edge is pushed inward before the final dilation of the foot takes place. During reheats to soften the bubble of the foot, the lowermost part of the stem unavoidably softens and the soffietta is used to force-cool that.

Next, decorative wings are added to the foot. A bit is added, cut free of its gathering iron, elongated, and the second attachment point made. The excess glass is cast free. Then, using the waffle pincers and the straight pincers, the decoration is created. The completed foot is placed on hold in the annealing oven.

The cup begins with a substantial gather of glass. A bubble is blown and elongated. The tip is pulled out to make pointed and to further elongate the bubble. The excess glass is trimmed away and, after the bubble stiffens, a substantial gather of molten glass is added to its tip. This is immediately flattened, and the disc is pushed upward. While this glass is still soft, it's forcefully pressed into a 12-ribbed optic mold. The ribs are pincered to cause them to stand more proud, and every other rib is snipped with the shears. This is a pattern often called 'broken ribbing'. After reheating the glass, air is blown in with the rubber blow hose. The thin glass inflates first. A constriction is formed near the blowpipe and, as blowing continues, the thick glass continues to inflate. Excess glass is trimmed free of the tip, and a small amount of glass is added to the tip of the bubble. This will become a merese. Another small amount of glass is added to the tip of the merese. Its end is gently flattened and the disc is pulled outward. Next comes the transfer to the punty. The tips of the pincers are held in the constriction, the blowpipe tapped on the right arm of the bench, and this causes a clean, even break.

A tiny gather of glass on the end of the metal rod is used to create a thread. A lip-thinning procedure ensures that the edge of the goblet is as thin as possible. The thick glass is pulled outward, a constriction made, and while the constriction is held with the diamond shears, the thick glass is knocked free. The opening procedure begins with reheating, dilating the hole to about an inch and, then with multiple reheats, toolings with the jacks, and inflations with the soffietta, the cup is given its final shape and diameter. The finished cup is placed on hold in the annealing oven.

The assembly begins with a very hot punty, to which the foot is attached. A small bit of molten glass is placed at its tip, and the monogram picked up and attached. Throughout the assembly process, it's essential to keep all parts well over 1,000 degrees Fahrenheit. Another small bit is added to the top of the monogram, the crown picked up and put in place. A final check is made for alignment before the cup is added. A tiny bit is added at the top of the crown, cut free of its gathering rod, and the cup is attached. The vessel is flashed deep within the furnace, checked for alignment, flashed again in the furnace. The completed object is lowered into the annealing oven and broken free of the punty.

The lid begins with an identical crown, to which is added a rather large gather of clear glass, and this is formed to become the orb. The cross begins with a tiny gather of glass added to the tip of the orb, elongated, and then made square in cross section using the waffle tool. The horizontal elements are added. Here, a small bit of glass cut free, and made square in cross section with the waffle tool. And this, the finial for the lid, is placed on hold in the annealing oven.

The glassblowing for the lid is essentially the same as that for the cup, only here, on the punty, a flange is made with the tips of the jacks. The lower edge is opened, somewhat. The diameter is carefully checked to correspond with the diameter of the cup. At this point, the wood jacks are used to further enlarge the diameter, and to make it match that of the cup. Another punty is attached to the inside of the lid. The first punty broken free, and this will allow, with a glue bit, the attachment of the finial. After reheating and alignment checks, the lid is placed in the annealing oven for slow cooling. 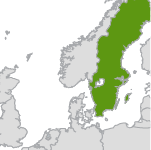